One part of geometry is the study of angles. An angle is made up of two rays. A ray is a part of a line. It starts at a point and extends forever from that point.

Two rays that have the same endpoint make an angle: 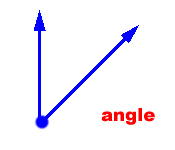 There are many kinds of angles. Angles sizes are measured in degrees (°). There are 360° in a full circle. We use a tool called a protractor to measure angles.

A right angle is 90°. It is a perfectly square corner like the corner of a piece of paper or the angle where two walls come together. 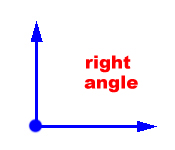 An acute angle is smaller than a right angle. It measures less than 90°. 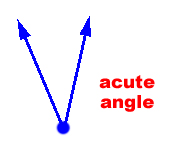 An obtuse angle is larger than a right angle. It measures less than 90°. 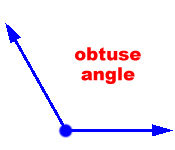 A straight angle is made of two rays that make a straight line. It measures 180°.

Estimate the size of these angles: 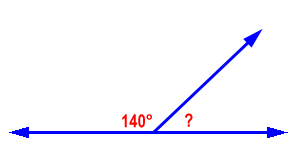 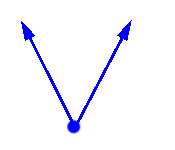 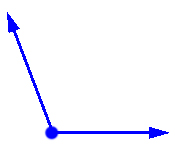 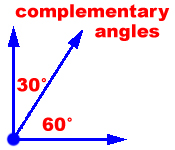 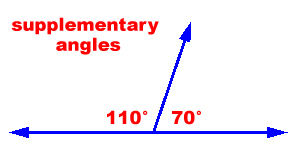 If two angles have the same measure, they are congruent.

When two lines cross or intersect, four angles are formed. The pairs of opposite angles are called vertical angles. Vertical angles always have the same measure. They are congruent. 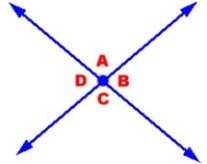 A transversal is a line that crosses two parallel lines. Eight different angles are created by this line. Look at the angles and see which ones look like they are the same size.

There are four pairs of angles in this that are the same size. They are called corresponding angles. 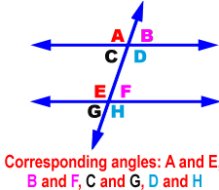 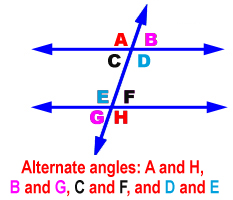 Here is a trick to help you remember this. If a line crosses two parallel lines, all the resulting angles will be one of two sizes. And the supplementary angles (above or below the parallel lines) will always add to 180°. Knowing this, you should be able to figure out how big all the angles are if you are given just one!

Now, let’s practice. Give the size of the angle marked. 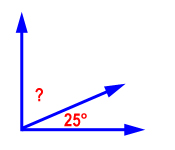 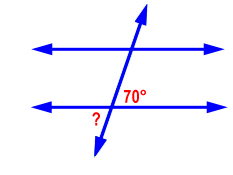 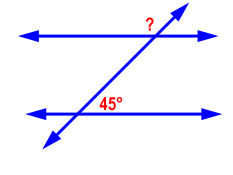 A transformation is a change in a shape, or a way of mapping the shape onto another space. Examples of transformations are slides, flips, and turns.

A translation, or slide, is moving a shape along a line. The shape is scooted over, like you’d slide a plate from one person to another. Here is an example of a translation:

A reflection, or flip, is a way of moving a shape across a line, producing a mirror image. It is like flipping a pancake. Here is an example of a reflection:

A rotation, or turn, s the turning or spinning a shape. It is like a person doing a cartwheel. Here is an example of a rotation:

A dilation is making a shape bigger or smaller. The shape stays the same, it is just blown up larger or shrunk down smaller.

Shapes that are congruent have the exact same shape and size. They could be slid, flipped, or turned and would then be exactly the same. These are examples of congruent shapes:

Shapes that are similar have the same shape, but may be different sizes. These are examples of similar shapes:

Now you can practice identifying transformations. 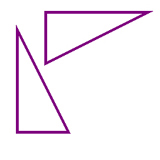 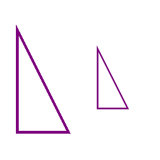 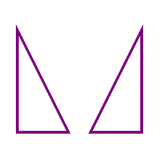 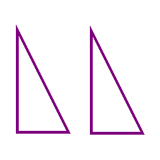 complementary angles – two angles that add up to 90°

congruent – having the same shape and same size

dilation – an enlargement or reduction of a figure

geometry – a field of math that studies the relationships between lines, shapes, and three-dimensional figures

opposite angles – two angles that don’t touch each other and are formed by crossing lines; also called vertical angles

perpendicular – at a right angle; at 90° to something

ray – a line extending indefinitely from a single point

reflection – a flip of a figure; a movement of a figure across a line, producing a mirror image

rotation – turn; the turning of a figure

supplementary angles – two angles that add up to 180°

transformation – a change in a shape, or a way of mapping the shape onto another space; examples: translation, reflection, rotation

translation – slide; to move a figure along a line

vertical angles – two angles that don’t touch each other and are formed by crossing lines; also called opposite angles